The Entrepreneur Who Took a Big Gamble Fred was desperate. His business was on its last legs. Given its inadvisable start, that shouldn’t have surprised anyone. What was surprising was that he didn’t just give up. The experts had told him his business model wouldn’t work, and with his money all but gone and no investors on the horizon, he should have seen the writing on the wall.

Instead, he did the least-advisable thing possible: he went to Las Vegas.

Fred had been banking on an investment deal with a major manufacturer. When that fell through, he had just $5,000 in the bank. He needed a minimum of $24,000 by the next Monday, just to keep things running for another week. He took that $5,000 and caught the next flight to Las Vegas, hoping Lady Luck would be on his side.

While waiting for his flight to land, Fred wondered if his college professor had been right after all. About ten years earlier, Fred wrote a term paper in his economics course at Yale. In that paper, he outlined the business plan that he hoped would make him a fortune. His professor was less than impressed. He thought the notion was overly optimistic and wouldn’t work. Fred got a C for his efforts. Now, he wondered if that grade was higher than what he deserved.

When Fred’s plane landed, he went straight to the casinos and hoped that his luck would change.

At first, things looked promising for his business. He inherited $4 million from his parents and used that money to leverage additional loans and investments. Within a year, he had $91 million on hand to start operations. Almost from the beginning, his luck was bad. Within two years, the money had evaporated, leaving him with just $5,000 out of the original $91 million.

Fred thought he had a lifeline for the company. He had been in serious negotiations with General Dynamics, and he was certain the deal would give his company the needed capital to keep its head above water long enough to begin making a profit. To his utter dismay, the deal fell through. Now he was in serious trouble. That’s why fate found Fred on his way to the blackjack table.

One can only imagine how his heart was racing. History does not record just how much time he spent at the table. What we do know is that he walked out of the casino with $27,000 — just a little more than enough to keep his company afloat for one more week.

As it turned out, one week was all the breathing room he needed. Soon, he was able to secure another $11 million in investments. Within a year, things started to really click, and his fledgling company brought in $75 million in revenue. Just a couple of years later, his company went public. 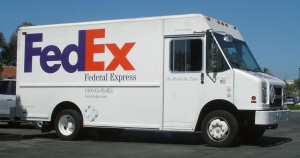 That was 1978. More than forty years later, the business model has proven to be worth a bit more than the C grade Fred received on his term paper. In Fiscal Year 2020, Fred’s company generated $69.2 billion in revenue and was ranked 50th out of all U.S. corporations in terms of revenue.

Fred Smith took a gamble, and it paid off. Think about that the next time you see one of his familiar delivery trucks pull up in front of your house and ponder what it would have meant if Lady Luck had worked against Fred and his brainchild, FedEx.