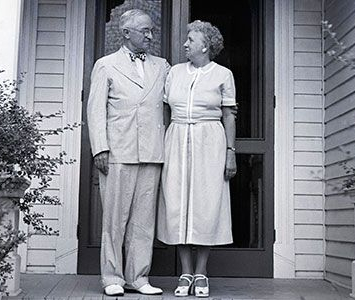 In an era of political scandals, it is refreshing and reassuring to see a couple whose love for each other was unscathed, even through the most tumultuous of times. Such is the example of Harry and Bess Truman.

Harry Truman was 6 years old when he met 5-year-old Bess Wallace in a Sunday School class in Independence, Missouri. It was love — or at least infatuation — at first sight, as far as Harry was concerned. For Bess, it wasn’t quite as immediate. Occasionally, she would allow Harry to walk her home from school. He later remembered, “I was lucky if I got to carry her books home for her sometimes.”

Finally, 29 years after Bess captured Harry’s heart, he walked her down the aisle. They were married on June 28, 1919.

Whenever Harry was separated from Bess — and frequently even when they were both under the same roof — he wrote long, sappy letters to her. Shortly after becoming President, Harry was horrified to find Bess burning his old love letters. He said, “Think about history!” She replied, “I have,” and continued tossing pages into the fire.

Despite Bess’s selective censorship, more than 1,200 of Harry’s letters survive and can be found at the Harry S. Truman Presidential Library and Museum. They paint a fascinating picture of a romance that spanned more than 80 years.

On their 29th wedding anniversary in 1948, the President wrote to his First Lady, saying, ”Twenty-nine years! It seems like 29 days. You still are on the pedestal where I placed you that day in Sunday School in 1890. What an old fool I am.”

The feisty President had little patience for anyone who hinted at any kind of disrespect toward his bride. When someone asked him to comment about his wife’s appearance, Truman curtly responded, “She looks exactly as a woman her age should look.” Another time, when a friend told Truman about the slogan he’d seen on a billboard, “Gentlemen prefer blondes,” the president responded, “Real gentlemen prefer gray.”

If Harry was impatient toward any disrespect toward Bess, he became outright furious at the suggestion of anything that would undermine their love. In 1945, shortly after Germany’s surrender, Truman traveled to Potsdam, Germany, to meet with Winston Churchill and Joseph Stalin. After one session, the president got in his car to return to his quarters, and he gave a lift to a young Army public relations officer.

The officer said, “Mr. President, if there’s anything you need, just let me know. Anything, you know, like women.”

Truman glared at him and said, “Listen, son. I married my sweetheart. She doesn’t run around on me, and I don’t run around on her. I want that understood. Don’t ever mention that kind of stuff to me again.”

The President’s driver said, “By the time we got home, he got out of the car and never even said goodbye to the guy!”