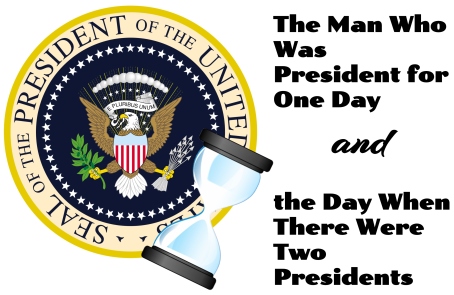 If you had to list the names of the men who have served as President of the United States, you will almost certainly write the names Washington, Jefferson, Lincoln, and Roosevelt. If you are a die-hard presidential history buff, you won’t overlook the more obscure ones, such as Millard Fillmore or Zachary Taylor. Before you finish your list, however, take another look and see whether you included the name of David Rice Atchison, the man who may have been President of the United States for one day. 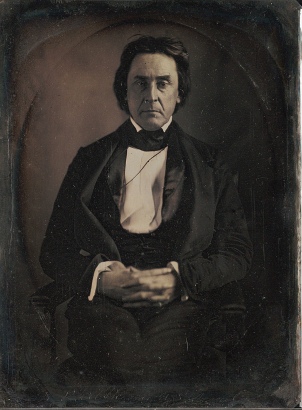 David Rice Atchison, the 12th President of the United States?

Prior to the ratification of the 20th amendment to the U.S. Constitution, the four-year term of a newly-elected president began at noon on March 4 following the election. In 1849, that date fell on a Sunday. President-elect Zachary Taylor did not want to violate the Sabbath by being sworn in on that day, so he decided to postpone his inauguration until March 5.

At the stroke of noon on March 4, the administration of President James K. Polk came to a close. So who was president for the next 24 hours?

The Presidential Succession Act of 1792 addressed the issue of who would hold the office if both the president and vice president were unable to do so. Although the order has changed since then, at the time, this responsibility fell to the president pro tempore of the Senate. On March 2, 1849, the U.S. Senate, in one of its last acts before adjournment, elected Missouri senator David Rice Atchison to hold the office. 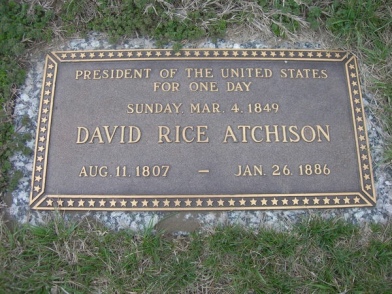 The grave marker of David Rice Atchison in Plattsburg, Missouri.

Fortunately, President Atchison did not pursue an ambitious program during his administration or generate any controversial foreign policy initiatives. If he had, there could have been some sticky challenges to his authority. There are at least a couple of problems with his claim to power.

In the first place, although he was elected as president pro tempore by the outgoing Senate, his actual term of office as a senator ended on March 4, at the same time Polk’s administration came to an end. He was re-elected by the incoming Senate to the same office, but not in time to begin his questionable 24-hour administration as chief executive.

If Atchison wasn’t president for that day, then who was? If you get right down to it, the correct answer is probably Zachary Taylor. How could this be if he didn’t take the oath of office until March 5? Therein lies another problem with Atchison’s claim to the presidency. Atchison didn’t take the constitutional oath, either.

The Constitution does not require that the oath be administered before becoming president. Article 2, section 1 states, “Before he enter on the Execution of his Office, he shall take the following Oath or Affirmation….” In other words, Taylor became President of the United States precisely at the stroke of noon on March 4; he just couldn’t exercise the duties of the office until he took the oath.

While we are on the subject, it is only appropriate to take a look at March 3, 1877 — the day the United States may have had two presidents at the same time.

Once again, the date scheduled for the inauguration fell on a Sunday. The election of 1876 was the most hotly contested of any to that point. Rutherford B. Hayes had lost the popular vote to Samuel Tilden by a small margin, but he appeared to carry a majority in the Electoral College. In an eerie foreshadowing of what would happen 124 years later in the election of 2000, there were accusations of voter fraud and misconduct in Florida and other southern states. To resolve the issue, Congress created an electoral commission to make the final decision. After months of investigation and debate, the commission voted on March 2 along party lines to award the presidency to Hayes.

The country was still licking its wounds from the Civil War and the assassination of Abraham Lincoln. Many had concerns that insurgents might attempt to take advantage of any question about who was actually in command.

To address this problem, outgoing President Ulysses S. Grant invited Hayes to the White House on March 3 for dinner. At one point, as the guests were conversing, Grant, Hayes, and Chief Justice Morrison R. Waite quietly excused themselves and went to the Red Room of the White House. There, Waite administered the oath of office to Hayes as the 19th President of the United States.

Of course, Grant was still president until noon the next day. Does that mean we had two presidents for that period of time?

Again, the issue comes down to the purpose of the oath. The Constitution does not say that the oath has to be taken only after the outgoing president’s term has ended. It simply says no one can begin exercising the duties of the office until the oath has been taken. Grant’s term ended, on schedule, at noon on March 4. Hayes became President of the United States at the same moment. Since he had already taken the oath, it was unnecessary to do anything else in order for him to immediately begin performing the duties of the office.

Even so, Hayes again took the oath of office two days after the first. On March 5, in a public ceremony, he repeated the words from the private ceremony.