The Mysterious Illness That Killed 80% of a Nation

At a time when much of the world’s attention is on the COVID-19 coronavirus global pandemic, it is appropriate to remember an epidemic that history has largely overlooked, despite the fact that it wiped out as much as 80% of a country’s population. You have heard of the Black Death and the Spanish Flu, but how much do you know about the Cocoliztli Epidemic of the 16th century?

In 1545 a curious and terrifying new sickness showed up among Mexico’s Aztec people. The first symptoms included high fever and headaches. These were quickly followed by bleeding from the eyes, nose, and mouth. The fast-moving sickness overwhelmed the body, bringing death within three or four days.

Franciscan friar Fray Juan de Torquemada described the symptoms in 1576 in his journal.

The fevers were contagious, burning, and continuous, all of them pestilential, in most part lethal. The tongue was dry and black. Enormous thirst. Urine of the colors sea-green, vegetal-green, and black, sometimes passing from the greenish color to the pale. Pulse was frequent, fast, small, and weak—sometimes even null. The eyes and the whole body were yellow. This stage was followed by delirium and seizures. Then, hard and painful nodules appeared behind one or both ears along with heartache, chest pain, abdominal pain, tremor, great anxiety, and dysentery.

The locals named the sickness “cocoliztli,” meaning “pestilence” in the Aztec Nahuatl language. Cocoliztli moved quickly through the body, and it from person to person at an alarming rate. 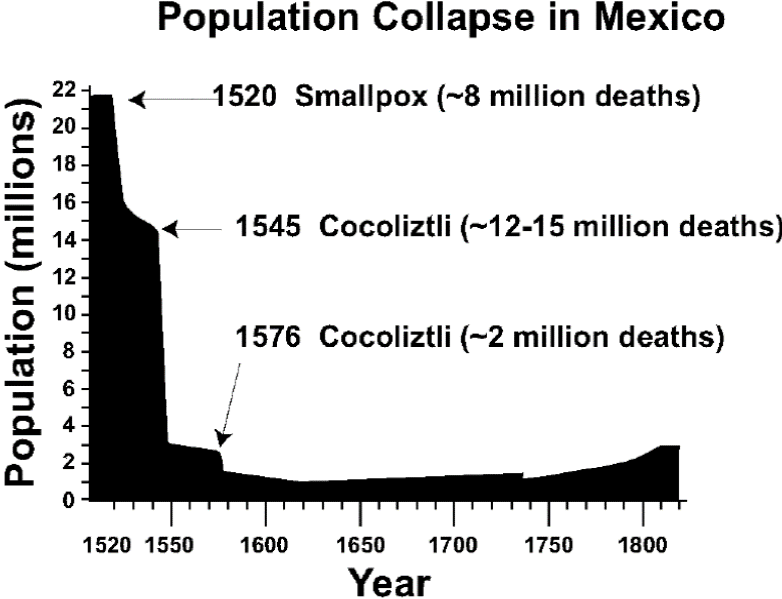 Graph showing the decline of Mexico’s population as a result of smallpox and cocoliztli.

The Cocoliztli Epidemic came right on the heels of a disastrous outbreak of smallpox. In 1520 there were nearly 21 million people living in Mexico. Smallpox took the lives of 8 million after being introduced to the population when Hernán Cortés began his exploration and invasion of Veracruz.

With its numbers down to little more than 15 million people by the time of the cocoliztli outbreak, the effects of the new sickness were nothing short of apocalyptic. In less than five years as many as 15 million people died from the mysterious plague. Despite a high birth rate and attempt to rebuild the population, scarcely more than 3 million people remained in Mexico in 1576 when cocoliztli made a terrifying return visit. Another two million people perished to the sickness, leaving fewer than 1 million inhabitants in the land as Mexico entered into the 17th century. In its weakened condition, the native Mexican population stood little hope of resisting European colonization.

The exact identity of the cocoliztli sickness remains in doubt. Recent bacterial genomic studies point toward suggested that Salmonella, specifically a serotype of Salmonella enterica known as Paratyphi C, as being at least partially to blame. Additionally, epidemiologists suspect a native form of viral hemorrhagic fever added to the calamity.

While much attention is properly drawn to the Black Death and the 75-200 million people who died in Europe from the bubonic plague, it should be noted that Europe emerged from the pandemic with 50-65% of its population intact. In terms of mortality percentage, the Cocoliztli Epidemic eclipses the Black Death and makes it one of the deadliest epidemics in history.