When “I Don’t Care” and “Whatever” Are Brilliant Business Plans 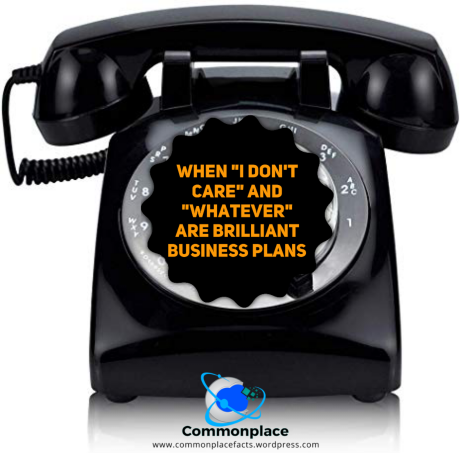 If you are young enough to have always had access to a cell phone, you’re probably not old enough to remember the battle of telephone service companies. In the days when long-distance providers fought for business and spent millions of dollars on advertising to attract customers, there was one company that made its money with an ingenious use of name selection.

Prior to 1982, there was only one name in the long-distance telephone business: AT&T. It was not only the largest long-distance service provider, but it was also a monopoly. If anyone wanted to place a collect call (a service where the recipient pays for the call instead of the originator), it was just assumed that AT&T would be the provider of that service.

When government regulators broke up the AT&T monopoly in 1982, the nation found itself with a plethora of long-distance companies. This required telephone operators to ask those who placed collect calls to choose which long-distance carrier they wanted to use. Many callers continued to rely on AT&T, but a significant number had no particular preference and would respond that they didn’t care or it didn’t matter.

That’s when KTNT Communications saw its opportunity. The relatively-small Texas-based company registered as a provider for long-distance calls. Its prices were not particularly competitive. For a 3-minute call between Houston and Dallas, KTNT customers paid $7.50, compared to AT&T’s charge of less than $5 for the same service. Even with the noticeably higher rates, KTNT was attracting customers and making a profit. What was its secret?

Taking advantage of callers’ lackadaisical attitude toward long-distance providers, KTNT registered three subsidiaries with the official names “I Don’t Care”, “It Doesn’t Matter”, and “Whatever.” When telephone operators asked collect callers which company they wished to use, anyone answering with “I don’t care,” “It doesn’t matter,” or “Whatever,” was immediately connected to the KTNT-owned provider of the same name.

Until cell phones came along and made collect calls virtually extinct, KTNT made quite a bit of money by their “Whatever” approach to company names.