Getting a Hole in One in Basketball 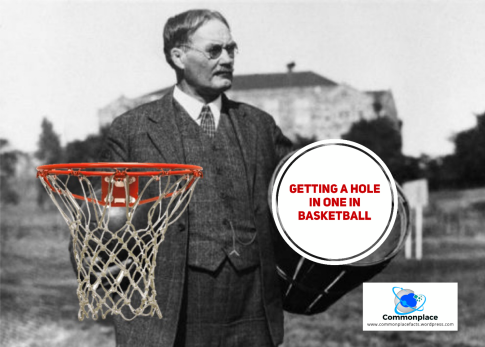 There is much about the game of basketball that is easy to understand. Beginners can grasp the basic concepts very quickly. There is one aspect of the game that, in retrospect, seems glaringly obvious, but it took several years for the early participants to figure out: the hole in the bottom of the basketball net.

The game was invented by Dr. James Naismith. He was teaching physical education in Springfield, Massachusetts, and he wanted a fun way to improve his students’ physical fitness. He created a game that involved throwing a soccer ball into a peach basket nailed high on a wall. The type of ball was chosen for safety purposes. The basket was chosen because it was available. The basket was placed up in the air because Naismith had observed that most team injuries seemed to occur around the goal. By placing the goal up on the wall, Naismith concluded that injuries would be reduced. 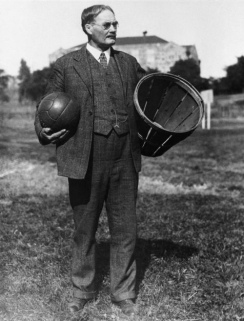 James Naismith with the first basketball and goals.

The first game was played on December 21, 1891. Had you watched that first game, it would have looked much like modern games. Things moved a bit slower, though, because every time a player scored a point, they would have to stop while someone climbed a ladder to retrieve the ball from the basket.

Eventually, someone hit on the idea of putting a hole in the bottom of the basket. This still did not speed things up a lot, because the hole was not large enough for the ball to pass through. The purpose of the hole was to allow someone to use a long stick to knock the ball out.

After about ten years, the peach basket was replaced by a metal rim and netting. Even with this innovation, no one thought to design the netting so the ball could pass through. When the ball went through the hoop, it was caught by the enclosed net. It remained there until someone came along to knock the ball out so the game could resume.

It wasn’t until 1906 — 15 years after the game was invented — that someone hit on the bright idea of cutting a hole in the bottom of the net. With this innovation, the pace of the game speeded up significantly, and basketball took a quantum leap into the modern age.