Rabbits: The Terror of Australia 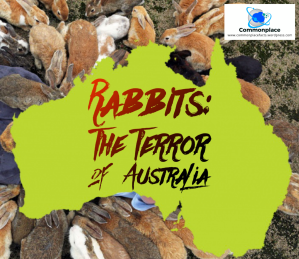 Rabbits are so cute and cuddly that it is hard to imagine the word “terror” being associated with them. (NOTE: This would be news to Napoleon and Jimmy Carter, each of whom had horrifying encounters with rabbits, as detailed here.) Despite such rabbit horror fantasies as Night of the Lepus, and Year of the Angry Rabbit, the long-eared, cotton-tailed little critters are generally considered meek and harmless.

If there is any country where fear of rabbits would be nonexistent, it seems it would be Australia. The Land Down Under is famous for some of the most dangerous animals on the planet. People who regularly encounter venomous snakes, ferocious crocodiles, and enormous insects probably don’t give a thought to something as innocuous as a rabbit. For that reason, it may surprise you that rabbits are considered Public Enemy Number One and one of the most dangerous creatures on the continent.

Disastrous things have happened as a result of well-meaning but misguided people. Just as one bird lover’s passion for Shakespeare resulted in a real-life Birdemic, one rabbit lover unleashed a cotton-tailed plague upon Australia. The man was Thomas Austin. He arrived in Australia in 1859 and settled near Melbourne. He brought with him 24 rabbits.

The rabbits were fruitful and multiplied. With no natural predators, the Australian rabbit population grew from 24 to more than 2 million in less than 10 years. That was just the beginning. The population explosion of rabbits became the fastest spread of any mammal in recorded history. Less than 100 years after Austin released his rabbits, the rabbit population was in excess of 600 million.

The plague of rabbits had devastating consequences. They consumed massive amounts of crops and overwhelmed other species in terms of competition for resources.The Australian government estimates that one-eighth of all mammalian species on the continent is extinct, with rabbits being the primary cause.

To combat the growing problem, scientists intentionally released the pathogens for the rabbit disease myxomatosis into rabbit habitats. The initial results were encouraging, bringing the rabbit population down to 100 million. Unfortunately, rabbits developed immunity to the disease. Today, the numbers have risen to an estimated 300 million.

With rabbit-caused damage to crops costing Australian farmers an estimated $600 million per year, the government has implemented a number of ambitious initiatives. One of the most audacious was the State Barrier Fence of Western Australia. Also known as the Rabbit Proof Fence, the State Vermin Fence, and the Emu Fence (Read about the ill-fated Australian war against the emu), it stretched 2,023 miles (3,256 km) from north to south, in an attempt to keep the rabbits out of the western part of the country. At the time, it was the largest unbroken fence in the world. It was built between 1901 and 1907 at a cost of about $402/mile ($250/km). That comes out to $11,590/mile ($7,209/km) in 2020 currency.

The attempt to keep the rabbits at bay by fence was, alas, unsuccessful. As it turns out, rabbits are quite persistent and can burrow rather deeply. Despite routine patrols by camel-riding inspectors, the rabbits somehow managed to bypass the barriers and populate Western Australia.

Today, rabbits continue to be a threat. Keeping rabbits, selling rabbits, releasing rabbits and introducing rabbits are crimes under the Land Protection (Pest & Stock Route Management) Act 2002, with maximum penalties of $44,000 and six months’ imprisonment. In 2014 rabbits were classified as an Invasive Biosecurity Matter.

Next time you see a cute little bunny and are tempted to pick it up and cuddle, remember the horrors unleashed in the Land Down Under by this long-haired threat to humanity.