Pierre Brassau: the Chimpanzee Who Made a Monkey Out of Modern Art

When the paintings of Pierre Brassau were released for public viewing in 1964, the artistic community was lavish in its praise. Rolf Anderberg of the Göteborgs-Posten wrote, “Brassau paints with powerful strokes, but also with clear determination. His brush strokes twist with furious fastidiousness. Pierre is an artist who performs with the delicacy of a ballet dancer.”

Only one critic failed to join in the praise, stating, “Only an ape could have done this.” As it turns out, that lone dissenter was correct.

Pierre Brassau was the pseudonym of Peter, a 4-year-old chimpanzee at Sweden’s Borås Djurpark zoo. The chimp was drafted to play the leading role in a hoax by Swedish journalist Åke “Dacke” Axelsson. Axelsson, who wrote for Göteborgs-Tidningen, wanted to see if art critics could tell the difference between human creators of modern art and their non-human counterparts. 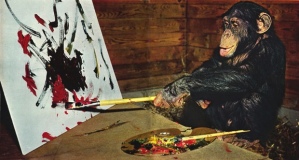 Axelsson enticed Peter to paint by giving him a brush and enticing him with bananas. Initially, there was some difficulty in getting Peter to apply the paint to canvas, since he developed quite the taste for the paint. (Apparently, cobalt blue was his favorite flavor.) Eventually, Peter produced a number of finished paintings. Axelsson selected the best four and submitted them for exhibit at the Gallerie Christinae in Göteborg, Sweden.

After proving that the critics did not know what they were talking about, Axelsson revealed the nature of the hoax. Anderberg, the critic who had heaped such lavish praise upon the work, insisted that Peter’s work was “still the best painting in the exhibition.” One private collector, Bertil Eklöt, agreed and bought one of the works for US$90 (equivalent to $727 in 2018).

Peter moved to the Chester Zoo in England in 1969, where he lived out his retirement as the most accomplished artist in the primate community.