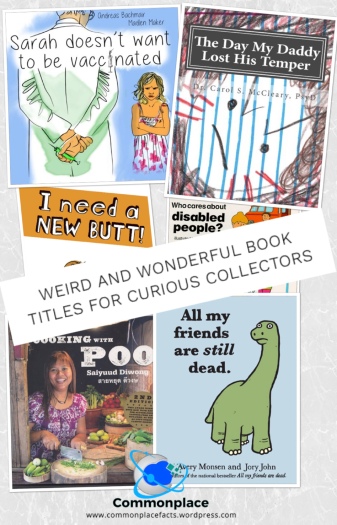 You can’t judge a book by its cover — or its title. Even so, it goes without saying that the title goes a long way toward motivating the potential reader to pick up the book and peruse its pages. With that in mind, you have to wonder what motivated the authors and publishers of some of the books we have found for sale.

Let it be acknowledged from the start that many of the topics covered by the books in this post are undoubtedly serious issues that need to be discussed. The purpose of this post is not to diminish the subject. Even the most serious-minded person has to admit that the following books are a departure from what you would expect to see in your typical home library.

What follows are actual books — most of them children’s titles — available for purchase. The publisher’s book description is included, as well as purchasing links, in case you still have some shopping to do for that bookworm who is hard to buy for. 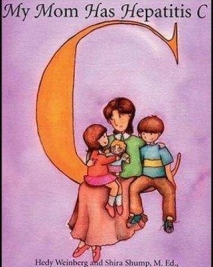 My Mom Has Hepatitis C — “Jake and Celia worry when their mom tells them that the Hepatitis C virus causes her to get tired, but soon adjust and find out how medicine and liver transplants help people get well.” The book description seems particularly surreal, when tagged with the following: “Discover delightful children’s books with Prime Book Box, a subscription that delivers new books every 1, 2, or 3 months…” 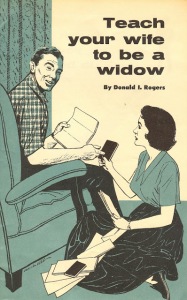 Teach Your Wife to Be a Widow by Donald I. Rogers. We featured this book in this post in 2016, but it bears repeating here. The publisher describes the book as, “A wise and comprehensive guide book for all wives prudent enough to prepare for that time when they may become the head of the family.” A reviewer on Amazon.com posts, “I found this book in the glove box of my wife’s car, along with a length of rope, duck tape, chloroform, and a rag. It was bookmarked at page 17. I figure that gives me about 5 days to figure out what to do.” 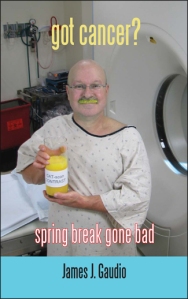 Got Cancer? (Spring Break Gone Bad) is the diary-like account of James J. Gaudio’s induction into a club that is perfectly indiscriminate in regard to membership, i.e., the cancer patients’ club. The narrative recounts the three principal components constituting Gaudio’s initiation: the insidious attack that the killer waged against him for months, an intense eleven days of hospitalization, and a substantially altered self-portrait of himself. 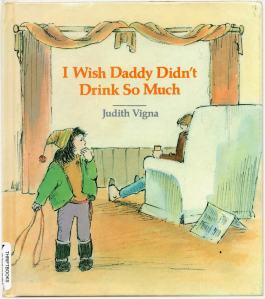 I Wish Daddy Didn’t Drink So Much by Judith Vigna. A young girl shares her feelings and frustrations about her alcoholic father’s behavior. 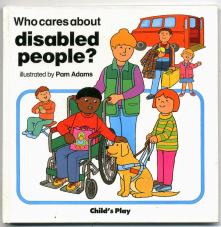 Who Cares About Disabled People? The publisher tells us, “The Who Cares series helps us to learn about ourselves, our world and our responsibilities, and fosters caring, sharing and loving instincts. 7 1/2″ x 7 1/2″ For children ages 5-10 years.” Written in 1989, it is clearly an attempt to educate, but everything about it is cringeworthy. 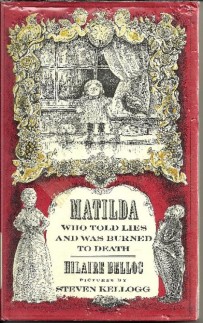 Matilda Who Told Lies and Was Burned to Death, by Hilaire Belloc. Written in 1992, this book is described as “Classic cautionary verse, adorned with magnificent full-color illustrations, plays a clever twist on the little boy who cried wolf with the story of a nasty child who yells ‘Fire!’ just once too often.” At some point, someone must have decided that the “and Was Burned to Death” part of the title was just a bit too gruesome for a children’s book, so it is now marketed with a revised title, “Matilda Who Told Such Dreadful Lies….” 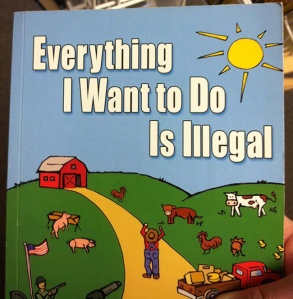 Everything I Want to Do is Illegal, by Joel Salatin. The cover makes this tome appear to be a children’s book. The publisher’s description suggests otherwise: “Drawing upon 40 years’ experience as an ecological farmer and marketer, Joel Salatin explains with humor and passion why Americans do not have the freedom to choose the food they purchase and eat.” The book provides a good introduction to the next couple of titles: 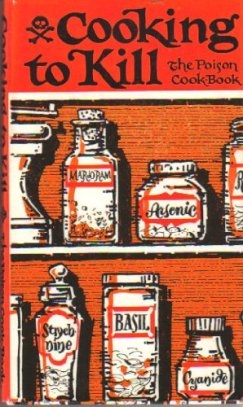 Cooking to Kill: The Poison Cookbook, by Ebenezer Murgatroyd. Don’t file this one next to your Betty Crocker cookbooks. This 1951 publication is described as, “Comic recipes for the ghoul, cannibal, witch and murderer. Stewing and potting mothers-in-law. Tested recipes for spiled brats, business rivals, and strayed lovers. Cannibal picnic meats. Sure-fire salads. How to make your friends die laughing!” 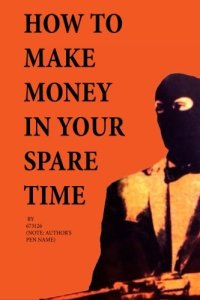 How to Make Money in Your Spare Time, by 673126. The title is innocuous enough, but the author’s name, which is actually a prison inmate number, coupled with the picture on the cover, suggests that this is not going to advise young, impressionable readers about the value of hard work and persistence. Instead, “This book takes advice from the Mafia, to politicians, giving insight to readers on how quickly money can be made in the underworld.” The same author has written another self-help book, entitled, How to Be a Drug Dealer. 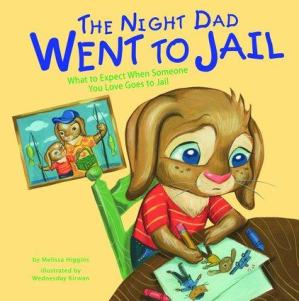 The Night Dad Went to Jail, by Melissa Higgins. This would be a good book to get the children of those fathers who purchase the preceding three books and try to put the advice into practice. The Night Dad Went to Jail is promoted by the publisher: “When someone you love goes to jail, you might feel lost, scared, and even mad. What do you do? No matter who your loved one is, this story can help you through the tough times.”

Possibly Dad went to jail for another reason, which is covered in… 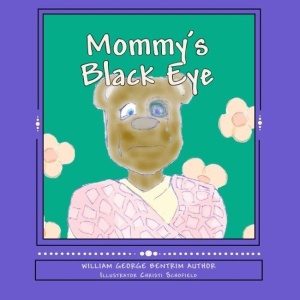 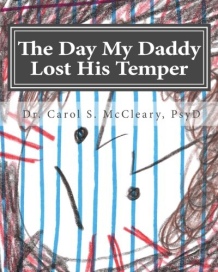 Mommy’s Black Eye, by William George Bentrim and The Day My Daddy Lost His Temper, by Carol S. McCleary. Sigh. It’s just plain depressing that anyone even had to think about writing these books. What happened to the days when the most-needed skill a kid could read about was how to tie shoes? 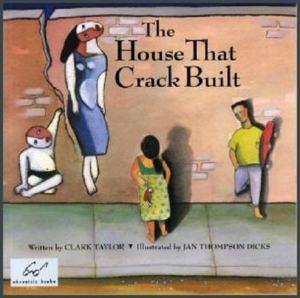 The House That Crack Built, by Clark Taylor. If your child is growing bored with Goodnight Moon, try something new. The publisher described The House That Crack Built, “With a beat reminiscent of hip hop or rap music, a well-known nursery rhyme is brilliantly transformed into a powerful poem about the tragic problem of illegal drugs and its victims. From the harvesting of the coca plants to dealers and gangs to the innocent crack babies born every day, cocaine’s journey is starkly traced from beginning to end. The rhythmic text, which is realistic but not moralizing, will appeal to teenagers and adults. But it is also accessible for even very young children, making this a valuable resource for parents, teachers, librarians, caregivers, and everyone else who is looking for a way to broach this difficult subject.” 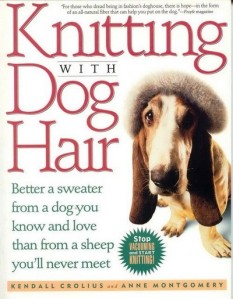 Knitting With Dog Hair, by Kendall Crolius. For those who do not want to pursue a life of crime and want to devote themselves to doing something useful, you might consider this instructional book. “From mittens made from a malamute’s mane to caps created from a collie’s crowning glory, this unusual guide offers a creative solution to that vexing problem of shedding. The book includes step-by-step instructions and is fully illustrated.” 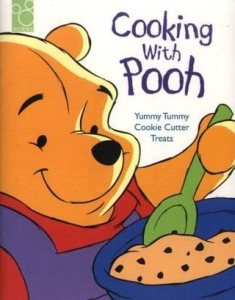 Cooking With Pooh: Yummy Tummy Cookie Cutter Treats. This book is offered, to show that titles can sometimes need some more explanation, such as… 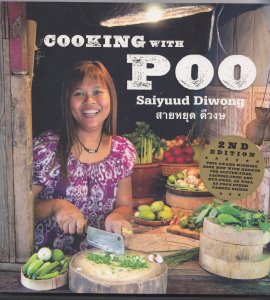 Cooking With Poo. For those who are unfamiliar with the author, her name is Poo Saiyund Diwong. Apparently, the title hasn’t put off too many people, since the link takes you to the sale of the second edition of the book. As long as we are on the subject, though… 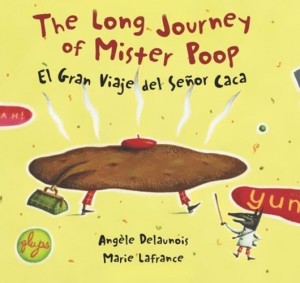 The Long Journey of Mister Poop, by Angèle Delaunois. Because children don’t talk about the subject nearly enough, this book brings us, “Caca. Poop. Number two. Kids have a thousand names for it. Don’t they want to know where it comes from? The Fantastic Voyage of Señor Caca shows kids the hows and whys. A smart wolf in a lab coat leads kids on a journey through their digestive system. A little girl eats an apple for a snack (crunch, crunch), and the apple drops into the esophagus (glug, glug) before a stop in the stomach. At each stop along the way, the wolf explains in simple scientific terms what the body is doing. After the pitstop in the stomach, what remains of the apple must enter the small intestine (gurgle, gurgle), then the large intestine, and finally . . . well, you know. Hint: It doesn’t smell like roses here. This delightful book marries Angèle Delaunois’ kid-sized scientific text with Marie Lafrance’s joyful kinetic illustrations to teach children what really does go on inside their bodies.”

This discussion is not just for children, after all, because, as we all know… 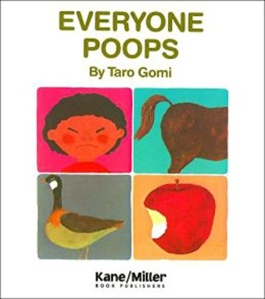 Everyone Poops, by Taro Gomi. This book, “Shows how creatures throughout the animal world, including humans, deal with the products of digestion. Parents need to know that children will find this book immensely funny and will love to point out the excrement from each animal.”

If the cover is representative of anything, not only do people, horses, and geese poop, but so do apples.

Given the subject matter, it is fascinating that the publisher also notes, “Turtleback binding is a highly durable alternative to a hardcover or paperback book. The comprehensive cover reinforcement process will drastically combat wear and tear, keeping your favorite books in great condition for years to come! Turtleback books are ideal for any reader, or for use in schools or libraries.” And bathrooms, presumably. 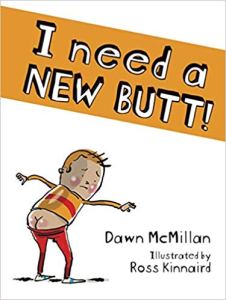 I Need a New Butt, by Dawn McMillan. You will, undoubtedly, want to know why. The publisher tells us, “A young boy suddenly notices a big problem — his butt has a huge crack! So he sets off to find a new one. Will he choose an armor-plated butt? A rocket butt? A robot butt? Find out in this quirky tale of a tail, which features hilarious rhymes and delightful illustrations. Children and parents will love this book — no ifs, ands, or butts about it!”

It should be noted that the adventures of the hero of this novel continue in the sequel, I Broke My Butt, where the protagonist “accidentally glued a serving tray to his behind — and he’s tickled pink!” 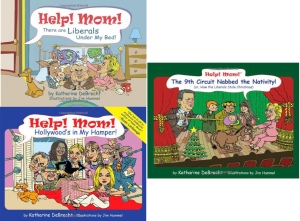 Sometimes children have to be prepared to deal with things even more horrifying than the boogeyman. Katherine DeBrecht comes to the rescue with Help Mom! There Are Liberals Under My Bed!, Help Mom! Hollywood is in My Hamper!, and Help Mom! The 9th Circuit Nabbed the Nativity! These books are described as offering “a fun way for parents to teach young children the valuable lessons of conservatism.” 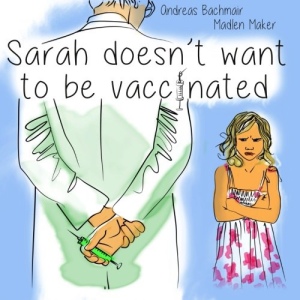 Sarah Doesn’t Want to Be Vaccinated, by Andreas Bachmair. “Sarah is really excited about the upcoming Girl Scout trip but there is a problem: she has no vaccination record and doesn’t want to be vaccinated.. Can she still go or will she have to stay home? This book is dedicated to all children and parents who are concerned about vaccinations and refuse to give in to the constant vaccination propaganda. Parents who refuse to vaccinate their children make this decision after careful consideration, because they are convinced that vaccinations do more harm than good.” This book will be purchased by those who did not read Benjamin Franklin’s warning about the failure to vaccinate. It probably should be purchased with another book that will undoubtedly prove useful…

Drop Dead, by Babette Cole, “…turns ageism on its ear in this hilariously fresh look at the human life cycle.”

Since anti-vaccers have a tendency to group together, there are a couple of other books they might want to check out: 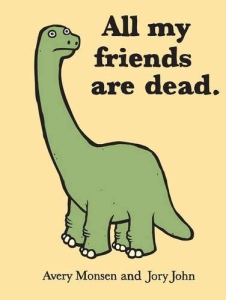