By Commonplace Fun Facts on December 8, 2019

The influence happens so slowly that she isn’t even aware of her loss of free will. As the invading alien inside her grows and develops, it gradually assumes more and more control, until the host is nothing more than a mindless, zombie-like shell, obeying the orders of her parasitic controller. No, this is not the plot to some cheesy science fiction movie. What you have just read takes place countless times every day — perhaps in your own back yard.

The relationship between the orb-weaving spider (Cyclosa argenteoalba) and the parasitic wasp (Reclinervellus nielseni) is unusual, to say the least. It is the stuff of nightmares, to say the most. The wasp is able to completely dominate the spider through mind control that is worthy of the most terrifying science fiction/horror movie plot.

The process begins when a female wasp attacks the orb weaver in its web. The attack does not kill the spider. Instead, she deposits an egg on the spider’s back. Once it hatches, the young larva immediately begins taking over control of its host. 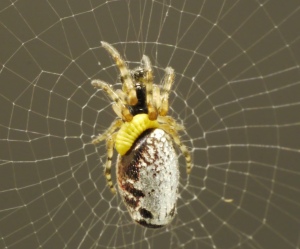 The orb spider, unaware of the development of the wasp larva on its back.

What happens in the next days is true fuel for nightmares. As the larva grows, the spider, seemingly unaware of the parasite’s presence, abandons its ordered, geometric web designs and instead focuses on making webs built specifically for the purpose of safeguarding the larva as it prepares for its next stage of life.

The mind-controlled orb spider, building extra-strong webbing for the eventual use of its host.

The parasite-ridden spider first disassembles is existing web. Next, it builds the type of web it would make if it was about to molt. This web, known as a “resting web,” has no capture areas for snagging prey. Instead, the web is composed of fibrous threads designed to make the web particularly conspicuous. Larger animals are more likely to avoid a web they can see, so this adds to the level of protection. The spider also generates special strands of ultraviolet light-reflecting silk, making the web stand out even more.

A resting web is perfect to protect a molting spider for the two days needed to recover from the process. The wasp needs a good ten days of protection, however. That’s why the parasite also directs the spider to build an incredibly-strong web that can be used as a cocoon. This web, which is not usually produced by an orb spider, is composed of silk with a tensile strength at least 2.7 times stronger than the norm.

Once the spider has finished doing its master’s bidding, only one more task remains. The spider returns to the center of its web, where the larva kills its host. The homicidal parasite consumes the innards of the spider for nutrients then tosses the empty spider shell to the ground. The engorged larva then wraps itself in the ultra-strong web, making it into a safe and comfy cocoon. There, safe from predators and falling objects, it completes its metamorphosis into an adult wasp, so it can begin the cycle all over again.

Watch a video of the spider/wasp cycle here. 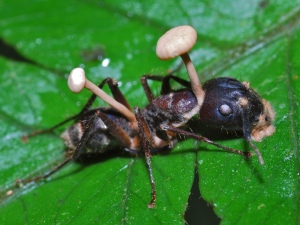 Mind control by parasites is not unique to the parasitic wasp/orb spider saga. Many species of ants in South America are prone to infection from fungi that turn the ants into zombies. The infected ants abandon their labors and instead climb to the highest point they can find. Once they can climb no further, the fungus sends tendrils through the insects’ heads, killing the ants and sending fungal spores into the wind.

Scientists have determined that the ants lose their willpower through the release of several chemicals into the tiny critters’ bodies, causing them to follow the fungi’s instructions. Researchers are studying the parasitic wasp/orb spider phenomenon to see if a similar chemical reaction is responsible for the spider’s behavior.