That Day Elvis Showed Up at the White House 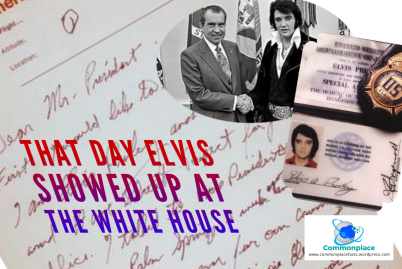 Not just anyone can walk up to the gates of the White House, ask to see the President and be taken seriously. Of course, the man who did that on December 21, 1970, was no ordinary man. He was a king. More precisely, he was the king. His royal title did not give him access to any nation’s throne, but it was one he had earned as one of the most significant cultural figures of the 20th century. The unannounced White House visitor was the King of Rock and Roll, Elvis Presley.

No one had planned on a visit from Elvis that day. In fact, it seems Elvis did little by way of planning. Two days earlier he stormed out of his home in Memphis after getting in an argument with his family about his spending habits. He flew to his Beverly Hills mansion. While there, an idea came upon him. He caught a red-eye flight to Washington, DC. While riding aboard the American Airlines flight, he put his thoughts on paper in a five-page handwritten letter to President Richard Nixon. In his letter, he articulates his respect for President Nixon and his office and expresses his concerns that arose from his “in-depth study of drug abuse and Communist brainwashing techniques.” He offers his assistance in combatting this scourge if only the President would appoint him as a “Federal Agent-at-Large” and give him a badge, reflective of the position. Before signing the letter, he noted that he’d be staying at the Hotel Washington under the assumed name of Jon Burrows. He provided his phone number and said he’d be staying in Washington for “as long as it takes to get the credentials of a federal agent.”

Elvis arrived at the White House at dawn, letter in hand. The guards called Nixon aide Egil “Bud” Krogh. Recalling the event, Krogh said, “I got a call from Dwight Chapin, who was one of my best friends on the White House staff. And he said, ‘The King is here.’ And I said, ‘King who?’ I looked at the President’s schedule and said, ‘There aren’t any kings on the president’s schedule.’ He said, ‘No, not just any two-bit king, the real king. The King of Rock–Elvis. He’s right here in Washington and he wants to see the president.’ And I thought that was just an elaborate practical joke.”

Krogh received the visitor and his two bodyguards in his office. “He really was Elvis Presley, dressed in a purple jumpsuit and a white shirt open to the navel with a big gold chain and thick-rimmed sunglasses. And he came in and I must say, I was very impressed with him. I had been a big fan of his during the 1950s. He proceeded to tell me about how much he felt for his country. He wanted to help the country, to do what he could. He felt he had an obligation because he’d been given so much. He talked about serving in the military and felt that that was his duty. I thought, ‘Well, you know, this guy seems to be saying the things that Richard Nixon would like to hear, so let’s see if we can’t set up a meeting.’ So I wrote a memo to the president suggesting some talking points and, and Dwight Chapin wrote a memo to then-Chief of Staff Bob Haldeman, to get approval for this meeting. And it came back approved.” 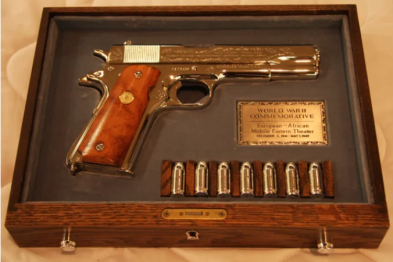 And so it happened that at noon that day, Elvis Presley walked into the Oval Office to meet President Nixon. The meeting was delayed slightly, due to the fact that Elvis brought a gift for president: a commemorative Colt automatic with bullets. The Secret Service was less than enthused about anyone — even Elvis Presley — taking a gun anywhere near the President of the United States.

The meeting between the president and the king started off awkwardly, with Elvis trying to explain to the Nixon how difficult it can be to perform in Las Vegas. Nixon cautiously responded, “I understand. Las Vegas is a tough town.” 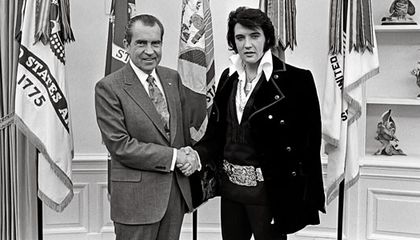 President Richard Nixon and Elvis Presley meet in the Oval Office on December 21, 1970.

What happened next took everyone by surprise. Elvis was so elated to learn that his mission had paid off that he went around the president’s desk and embraced him in a big hug. Krogh watched, horrified. “One of my abiding memories while thinking, ‘This is probably the last thing I’ll ever do in the Oval Office,’ was Elvis Presley hugging Richard Nixon, who’s sort of standing there looking up, thinking, ‘Oh, my God!'”

Following the awkward interaction, Elvis asked if his bodyguards could come in and meet the president. Nixon obliged, and after greeting the men, he returned behind his desk and opened up the bottom drawer where he kept gifts for visitors to the Oval Office. Elvis seemed to sense there was a treasure trove in that drawer, so he followed the president to get a look for himself. As Nixon withdrew cufflinks, paperweights, and golf balls, Elvis reached toward the back of the drawer where the most valuable gifts were stored. He started pulling out a number of items, saying, “Mr. President, they have wives.” 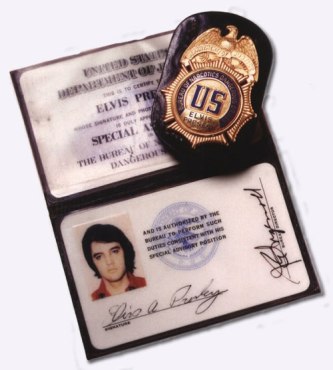 Elvis Presley’s badge and credentials as a “Federal Agent-at-Large” for the Bureau of Narcotics and Dangerous Drugs.

Later in the day, Elvis was presented with a badge from the Bureau of Narcotics and Dangerous Drugs and given the honorary title of Federal Agent-at-Large. Although the meeting was kept secret for more than a year, the Washington Post broke the story in January 1972. With his cover thus blown, it may explain why there is no record of the king ever using his law enforcement status to make a dent in crime.

Presley’s badge and credentials are on display at his home, Graceland. The original letter on American Airlines stationery and the gun he gave to the president are on display at the Nixon Library. The photographs of the historic meeting are the most requested items from the National Archives.

Read about the man who wagered that Elvis would return, riding on a horse.