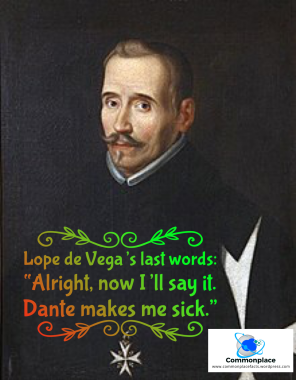 Spanish playwright Lope de Vega (1562-1635) had one secret that he carried up to the very end. As an eminent contributor to the world of literature, he tried not to speak ill of fellow authors, particularly those who were held in great esteem by so many. As he struggled to take his final breaths, however, there was one thing that burdened him so much that he simply had to get it off his chest. He took a deep breath and made his final, startling confession: “Alright, now I’ll say it. Dante makes me sick.”