The Original “Murderers’ Row”: The Inmates Who Played for Their Lives

Avid baseball fans are said to live and die by the sport. For one team in the early years of the twentieth century, the outcome of the game was literally a matter of life and death.

The Wyoming State Penitentiary got a new warden in 1911. Felix Alston supported social reform for inmates and wanted to rehabilitate them through education, skill training, and physical fitness. A devout fan of Detroit Tigers’ superstar Ty Cobb, Alston decided the physical fitness element could best be fulfilled through baseball.

As the inmates developed their baseball skills, Alston looked around for a team of all-stars. He decided that the men with the most to lose would be the most motivated to win. The result was the Wyoming State Penitentiary Death Row All-Stars. 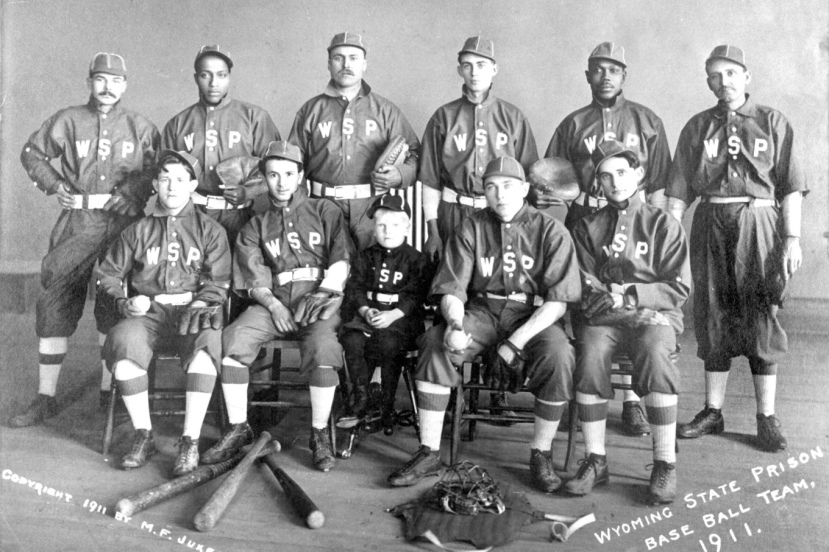 The members of the Wyoming State Penitentiary Death Row All-Stars. Presumably, the boy in the front row is a batboy and was not a convicted murderer.

Wearing dark blue uniforms trimmed in white, with large white letters W.S.P. across the chest (Wyoming State Penitentiary), the All-Stars were led by Joseph Seng, who was convicted of murdering his lover’s husband. First baseman was Leroy Cooke, who was sentenced for bludgeoning to death a barber and stealing his money. Second baseman was George Saban, who murdered several shepherds during the Wyoming Sheep Wars. Third baseman was Jack Carter, who was sentenced for shooting and killing an old hermit, cutting him up, and burning his remains in the fireplace. William Boyer, the pitcher, stabbed his father to death with a letter opener. The catcher, Horace Donavan, shot and killed his brother-in-law. Outfielders William Boyer, Darius Rowan, and Lazlo Korda, whose crimes included raping and killing eight people.

Alston challenged local teams to compete against his All-Stars. No team has ever taken the field the way the All-Stars did. The 12-inmate team marched onto the field, chained together. They stood in front of the dugout as their shackles were removed under the watchful eyes of armed guards. Guards surrounded the field, shotguns leveled at the players. As soon as the game ended, all players lined up on the third base line, where they were again handcuffed and shackled while the fans watched in fascinated amusement.

The games became quite popular and soon developed into something more than an opportunity for physical fitness. George Saban, one of the top players, earned the privilege of leaving the prison to visit the local saloon. While there, he greeted fans, signed autographs, and offered inside information. He also took wagers on the games. Soon he was making so much money for local bookmakers that he was allowed to come and go at his leisure. As the date for his execution neared, prison officials succeeded in getting it postponed so the games — and the wagers — would not be interrupted by anything as mundane as the execution of one of their star players.

Betting on the All-Stars brought quite a boost to the economy. As the money started to come in, prison officials decided to motivate the players even more. They threatened consequences for prisoners who did not perform well on the field. The consequences included moving the date of their executions forward.

The new rules brought results. In four games, the All-Stars went undefeated, trouncing their opponents by a combined score of 48-16. All was going well for the prison, the players, and those who were betting on the inmates’ success. That all changed when the press got wind of the situation.

The newspapers broke the story about the widespread gambling and the motivation for the players’ success. In response, Governor Joseph Carey issued a statewide crackdown on gambling, especially in regards to the All-Stars. With the cash cow dried up and the negative publicity from the exposure of the practice, the team was disbanded, and the teammates went back to Death Row.

The team leaders experienced dramatically different outcomes after the end of the All-Stars. Seng was hanged on May 22, 1912. Saban, on the other hand, managed to escape with help from a guard whose bank account had grown significantly by betting on the team. Saban was never recaptured.

In 1927 the New York Yankees would boast of a line of seven hitters who were famously known as “Murderers’ Row.” Did those players have any idea they were a pale imitation of the original Murderers’ Row from sixteen years earlier?

Read more about this fascinating chapter in the life of baseball in the book Death Row All-Stars: A Story of Baseball, Corruption, and Murder by Chris Enss.