Centralia: the Ghost Town of the Unquenchable Fire

Centralia, Pennsylvania used to be a quiet, busy town. Today it is quieter than ever, and the population has dwindled from 1,200 to 7. The reason for the community’s decline has nothing to do with a depressed economy or anything nearly as mundane. The secret rests with a raging fire that has been burning for over half a century.

The residents of Centralia were getting ready for the community’s Memorial Day celebration on Friday, May 25, 1962. In preparation for the weekend’s festivities, the city council approved cleaning up the 300-foot wide, 75-foot long pit that served as the area landfill. In accordance with the practices of the time, the pit was doused with gasoline and set afire. Little did they know that fire would doom the community and continue burning for centuries to come.

As the rubbish in the landfill burned, few gave any thought to the old coal mine immediately below the flames. Firefighters remained around the landfill, spraying water around its perimeter to keep it from spreading without realizing that it had already begun to spread — straight down.

Residents were still cleaning up from the Memorial Day festivities on May 29 when more fires were spotted. That began a routine that would continue for several weeks, as it slowly began to sink in that the rubbish fire had ignited one of the coal veins that snaked beneath Centralia.

The fires became increasingly dangerous as time progressed. The ground beneath the city itself became hotter and hotter, reaching over 900 degrees Fahrenheit in some locations. Smoke poured from sinkholes and gas-filled basements. Residents started to report health problems and homes began to tilt as the ground became increasingly unstable.

“Even the dead cannot rest in peace,” wrote Greg Walter for People in 1981. “Graves in the town’s two cemeteries are believed to have dropped into the abyss of fire that rages below them.” In 1981 a 12-year-old boy fell into a sudden sinkhole created by the fire, barely escaping death.

After nearly 20 years of failed attempts to put out the fires, authorities threw up their hands and gave up. Centralia was condemned, and the government began buying out residents as an incentive to get them to leave. A $42 million relocation plan encouraged most residents to leave. As each home was vacated, it was demolished, leaving fewer than a dozen buildings by the end of the 1980s. In 1992 the state of Pennsylvania took action to formally evict the remaining residents.

Despite the unsafe conditions, seven residents insisted upon remaining. They brought legal action against the state, objecting to their eviction. After much legal maneuvering, the state reached a compromise with the seven. They are permitted to remain in their homes for the rest of their lives, but they may not sell or give their property to anyone else. Upon their deaths or moving from their residents, the properties will revert to the state.

Geologists estimate the fire could continue to burn for another 250 years. Signs all around the once-cozy community now warn of the dangers of asphyxiation, sudden sinkholes, and other hazards. Even so, curiosity seekers still seek out the ghost town. Route 61, which once guided travelers to and from the community is now closed. The buckled and deeply-cracked asphalt gives the appearance of a road ravished by earthquakes. Its surface is covered by graffiti, giving it the nickname “The Graffiti Highway.” 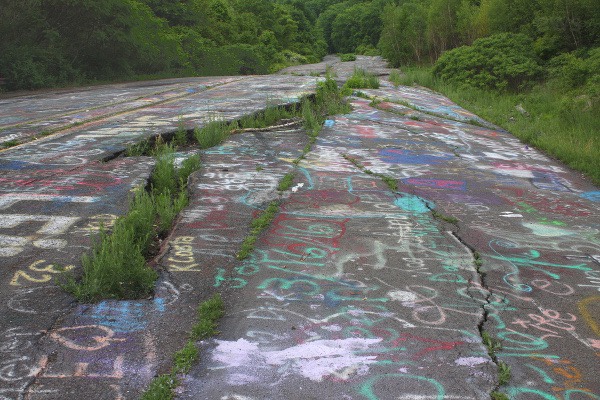 Road damage and graffiti on an abandoned section of PA Route 61.

“Silent Hill,” the horror-survival video game, is based off the remnants of Centralia. Although the game’s plot takes place in Main, the scenery looks very much like Centralia, with a continual rain of ash falling on the landscape.

Soon there will be no one remaining in Centralia, Pennsylvania. Only the crumbling pavement and occasional remnants of civilization will give anyone a clue that a thriving community one lived over the raging hellfire that burns below.

Read how the movie Herbie Goes Bananas was responsible for a radioactive disaster.