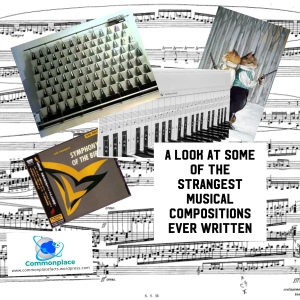 If you have difficulty remembering the lyrics to complicated songs, then “Duetto buffo di due gatti” (“Humorous Duet for Two Cats”) is for you. The song consists of just one word — meow — repeated over and over by competing sopranos. While the piece is typically attributed to Gioachino Rossini, it was actually just inspired by his works. The true composer is believed to be Robert Lucas de Pearsall, who wrote it under the pseudonym “G. Berthold”. Listen to “Humorous Duet for Two Cats” here.

Jim Fassett thought birds make the most beautiful musical notes possible. In fact, as far as he was concerned, there was no reason to even try to improve upon the sound, so he used bird sounds to compose “Symphony of the Birds.” The entire song consists entirely of naturally-occurring bird notes. Listen to Symphony of the Birds here.

Though Erik Satie’s “Vexations” (1893) consisted of only a half sheet of notation, don’t be deceived into thinking it is a short little piece. The composer notes at the top of the original manuscript that the motif be repeated eight hundred and forty times. Even before repetition, the piano line is unnerving: mild but menacing, exquisite but skewed, modest but exacting. Above the music, Satie included an author’s note, as much a warning as direction: “It would be advisable to prepare oneself beforehand, in the deepest silence, by serious immobilities.” Listen to Erik Satie’s “Vexations” here.

György Ligeti wrote “Poème symphonique” for an instrument that is never out of tune: the metronome. His 1962 composition requires ten “performers”, each one responsible for ten of the metronomes. The metronomes, all wound to their fullest, are arranged set to different speeds. The piece starts with silence of 2-6 minutes, depending on the conductor’s preference. Once the metronomes start, they are to begin simultaneously — or as much as is possible. The performers leave the stage and let the metronomes wind down. Each one stops at a different time, typically leaving the last one to play a few remaining beats before returning the stage to silence. Listen to “Poème symphonique” here.

“Opus clavicembalisticum” was composed by Kaikhosru Shapurji Sorabji in 1930. At the time of its completion it was the longest piano piece in existence. Its duration is around 4 – 4½ hours, depending on tempo. Several of Sorabji’s later works, such as the “Symphonic Variations for Piano”, which lasts for about nine hours, go even longer. What sets “Opus Clavicembalisticum” apart, aside from its duration, is its extreme complexity, making it one of the most technically demanding solo piano pieces in existence. Listen to “Opus Clavicembalisticum” here.

A couple of musical compositions earn their place on this list because of the instructions for performing, rather than for the content of the piece. One of these is La Monte Thornton Young’s “Piano Piece for Terry Riley.” The instructions are as follows: “Push the piano up to a wall and put the flat side up against it. Then continue pushing into the wall. Push as hard as you can. If the piano goes through the wall, keep pushing in the same direction regardless of new obstacles and continue to push as hard as you can whether the piano is stopped against an obstacle or moving. The piece is over when you are too exhausted to push any longer.”

The other piece that is here because of its instructions was composed by Wolfgang Amadeus Mozart for Joseph Haydn. The work itself has been lost, but not Mozart’s instructions. According to legend, the two composers once bet a case a champagne that Haydn would be able to perform any piece Mozart could compose. Mozart rose to the challenge with a piece that required the right hand to be playing at one end of the keyboard and the left hand at the other. In the midst of this was to be a note played from the middle of the keyboard. Mozart’s instructions required the performer to lean forward and play that key with his nose.

Read about and listen to the longest musical performance in history.

Read about and watch the musical composition that uses helicopters as musical instruments.