Jokes About His Name Drove Him Bananas 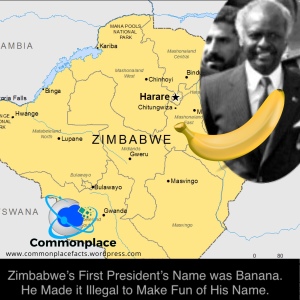 Growing up with the surname Banana could not have been easy. Just ask Canaan Sodindo Banana. One can only imagine the ribbing he received from classmates and neighborhood bullies. His name was ample ammunition for those who wished to taunt him. Banana’s low tolerance for teasing fueled his compulsion to command respect — a compulsion that ultimately propelled him to become the first president of Zimbabwe on April 18, 1980.

Much to his dismay, becoming president did not put an end to fruity jokes about his memorable last name. Every day would be yet another occasion for someone to slip throw in another pun about bananas. No amount of presidential trappings could peel take off the stigma of a name that was ripe prime for parody. The put-downs came in bunches multitudinous quantities. All of the ribbing turned Banana yellow red with rage.
“What’s the point of being president,” thought Banana, “if I can’t do anything about all these jokes?” Fortified with executive authority, the president enacted a law that forbade anyone from making fun of his name. The law went into effect in 1982, but alas, did not result in giving him the respect he wanted. In fact, the law put him on a fast track for more ridicule.  He left office on December 31, 1987, quickly overshadowed by his successor, Robert Mugabe.

Retirement did not bring the former president the respect and honor that commonly comes to former heads of state. Not long after leaving office, Banana fled the country due to criminal charges and fears for his life. He eventually returned to Zimbabwe and served six months in prison. Upon his release, he moved to Great Britain, where he spent the remainder of his life until his death from cancer in 2003.

All things considered, it would be totally understandable if the poor man went bananas crazy.