The Poetic Passage of Plakkopytrixophylisperambulantiobatrix 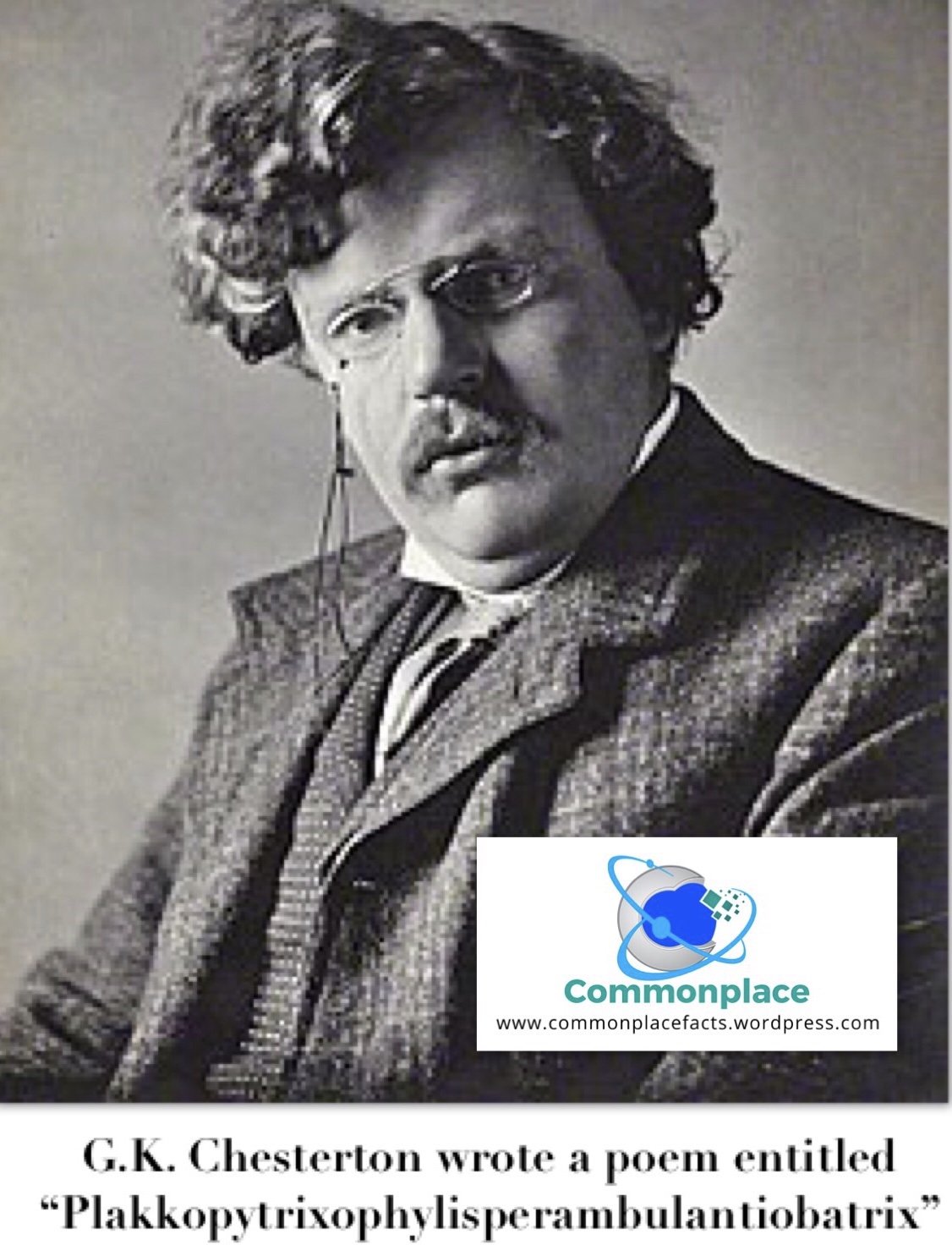 One of the more curious titles of any literary work is G.K. Chesterton’s poem “Plakkopytrixophylisperambulantiobatrix.” The meaning of the title and the reason for its choice is unclear. The poem appears in The Coloured Lands, a collection of Chesterton’s works that was compiled after the writer’s death. Chesterton’s choice, while lengthy, pales in comparison to some other ridiculously-long names that have been chronicled in these pages. Did he fall asleep while composing it, and bash his head against the typewriter keyboard? Did he get frustrated about his inability to come up with a title and slam his fist against the typewriter keys? Alas, we may never know Chesterton’s motivation for the lengthy and curious title of this delightful work.

Fear not, fear not, my children,
The last weird embers fade,
Blue corpses through the windows peer,
But still you seem afraid,
Perhaps there’s Something in the room,
Whatever would you do
If I were not among you now
To cheer and comfort you?

Heed not that pale thing in the door,
It smiles so like a skull,
You hear hoarse spectres scream and clank,
You find the evening dull?
Then let me tell a merry tale
Of dear old days of yore,
About a dragon of the wastes
That drank of human gore.

It dwelt among untrodden ways,
And ate the plaintive dove;
A dragon there were few to praise
And very few to love.
(I use this piece of Wordsworth
To show how much I know)
Uproariously popular
It was, as dragons go.

If I could only paint the Thing!
Just imitate its wink,
All you five infants, one by one,
Would rise and take to drink:
Or roll in death-pangs on the floor,
And lie there choked and blue,
O how I wish I could describe
This animal to you.

Some swore its fur was bushy brown,
Some swore that it was green,
With savage eyes of bluish grey:
Some swore that they had seen
In coils upon a sofa wreathed,
It, writhing as in pangs,
And tearing Bovril chocolate
With huge, abhorrent fangs.

When skies were blue with summer
It glittered, bright and blue,
And once, the stricken wanderer
In screaming terror flew,
For on the shining tableland
White gauze did round it glance,
And with one rose to crown it
He saw the dragon dance.

The Witless Youth in wonder
Sat lank upon a stone,
His Hat was monumental
Its secret—all his own.
The Sage was mild and hoary
And skilled in Wisdom’s page,
The Youth sat meek (as always)
And to him spoke the Sage.

“Go not to smite the Dragon
That wasteth field and fen,
Around her reeking cavern
Are strewn the hearts of men;
But youth is foolish: You, Sir,
Are singularly so—
So learn her horrid habits
At least, before you go.

“If you would raise her bristles up
And set her eye in flames,
Then seek the Hankin-Pankin
And read the Jenry-James;

Go with a train of spiders huge
With all their threads and thrums
From ledgers all declaiming
Interminable sums . . .

“But would you see the awful smile,
And soften down the Eye,
Then fetch the Stompy-Steinthal
And bring the Rompy-Rye;
And choirs of ladies tall and proud
With all one kind of nose,
And bucketsful of flowers,
And basketsful of clothes.’

(Unfinished, or if finished the last page has been lost.)