Is the Tomato a Fruit or a Veggie? Just Ask the Supreme Court 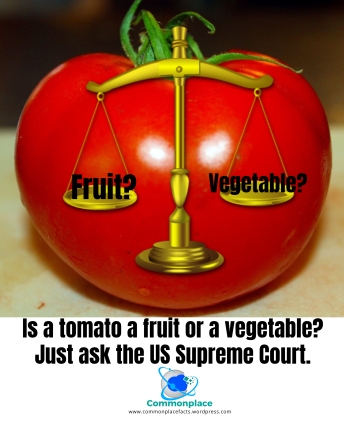 Is a tomato a fruit or a vegetable? Teachers of elementary school science enjoy confounding their students with the pronouncement that it is, scientifically speaking, a fruit. While this may be the last word, as far as botanists are concerned, lawyers look to no less of an authority than the United States Supreme Court. The high court wrestled with this question, and its decision might surprise you.

When the Tariff Act of March 3, 1883, went into effect, it imposed taxes on vegetables imported into the United States, but any fruit was free from taxation. When the Collector of the Port of New York imposed a tariff on the John Nix & Co.’s tomato shipments, the company objected. By way of evidence, the company argued that a tomato is botanically classified as a fruit.

True fruits are developed from the ovary in the base of the plant’s flower and contain the plant’s seeds. The tomato, being the part of the plant that contains the seeds, should be classified as a fruit, argued the company.

The arguments fell on deaf ears, and John Nix & Co. pressed the matter all the way to the United States Supreme Court. On May 10, 1893, the Court’s decision was handed down in the landmark case of Nix v Hedden, 149 U.S. 304, (1893). Justice Horace Gray wrote the opinion for a unanimous court and announced to a breathlessly-waiting world that a tomato is….

While acknowledging that a tomato is, botanically speaking, a fruit, the law in question should be read with commonly-understood definitions and usage, not scientific.

While the argument may still exist among botanists, as far as the law of the land is concerned, it is a settled issue. It is so settled, in fact, that Nix v Hedden was cited by supporters of 2005 legislation, officially naming the tomato as the “Official State Vegetable” for New Jersey.