You May Need to Adjust Your Clock … By 300 Years 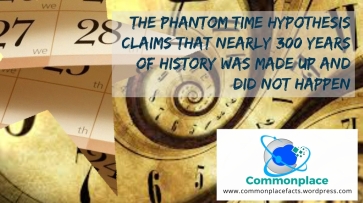 Were you one of those history students who had difficulty grasping the details of the Middle Ages? Perhaps that’s because the Middle Ages didn’t actually take place.

In 1986 Heribert Illig published Das erfundene Mittelalter (The Invented Middle Ages). He posits that a nearly-300 year period of time, AD 614–911, did not really take place and was, in fact, a conspiracy between the Holy Roman Emperor Otto III, Pope Sylvester II, and possibly the Byzantine Emperor Constantine VII. This concept is known as the Phantom Time Hypothesis.

The reason for this conspiracy? Illig believes these men really wanted their era to coincide with the year AD 1000 for psychological and public relations purposes. In order for this to happen, they had to cook up 297 years of fake history — the period of time we refer to as the Early Middle Ages.

What is Illig’s evidence for such a bold assertion? In his paper he cites the following:

For a more detailed explanation of the theory, look here.

Before you go off and proclaim yourself an enlightened citizen of the 18th century, consider the responses of Illig’s critics:

Now that you are armed with the facts, what year will you be celebrating on New Year’s Eve?

If that weren’t complicated enough, there are even more questions about the date, such as: