Indiana Jones and the Droids He Wasn’t Looking For 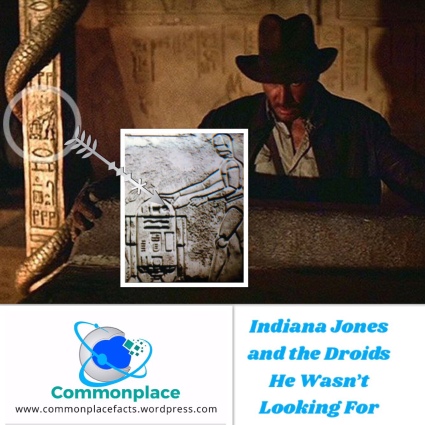 Archaeologist and adventurer Indiana Jones doesn’t miss much, but he apparently overlooked pretty conclusive evidence of a civilization that existed long ago in a galaxy far away.Steven Spielberg, the creator of the Indiana Jones films, enjoyed putting tributes to Star Wars in Raiders of the Lost Ark. Several noteworthy ones would have pointed Dr. Jones to evidence of alien life, if only he had not been so distracted by searching for the Ark of the Covenant.

One such scene occurs when Indiana Jones lifts a giant stone slab while in the Well of the Souls. On the stone pillar to the left of the screen is a series of hieroglyphics. One of those pictures clearly depicts the droids C3PO and R2D2.

These famous droids make a second appearance. The second time occurs just as Indy and Sallah lift the Ark out of its case in the same scene. On the back wall is a bigger hieroglyph of what looks like Princess Leia uploading the plans to the Death Star into R2-D2, with C-3PO standing behind them.

Other references to Star Wars appear, as well. The plane Indy uses to escape from the evil Belloq and the native Hovitos warriors bears the registration number “OB-CPO,” in reference to Obi-Wan Kenobi and C3PO.

In the film’s sequel, Indiana Jones and the Temple of Doom, Indy is seen visiting a Shanghai nightclub called “Club Obi-Wan.”

Click here for other examples of surprising cameo appearances.