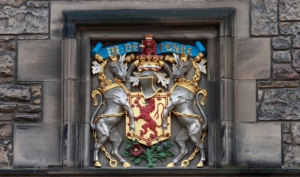 The Royal Arms of Scotland

Scotland and mythological creatures seem to have a fondness for each other. Not only does Scotland boast ownership of the Loch Ness Monster, it has adopted the unicorn as its official animal.

As far back as 1466, the unicorn appeared on the official coin of the realm, and the Royal Coat of Arms sports two rampant unicorns.

In all official representations of the unicorn, the beast is chained, since it was considered virtually untamable and extremely dangerous. Perhaps it is that fierce desire for independence that will forever unite the unicorn and the Scot.