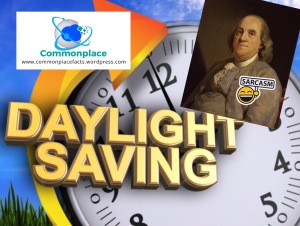 Benjamin Franklin is credited with some of the greatest ideas of all time. Not only was he the inventor of bifocal glasses, the Franklin stove, and lightning rod, but as one of the Founding Fathers of the United States, his ideas surpassed scientific inquiry and helped create a nation. In fact, so wide were his interests that he spoke into virtually every area of human interest, and the world continues to feel his influence today in the arts, medical science, economics, cartography, and much, much more.

For those countries that observe Daylight Savings Time, Franklin’s influence is often remembered with resentment twice each year as the nation adjusts to Daylight Savings Time. Remembering to change all the clocks is almost as bad as the feeling of jet lag for a few days as the body tries to catch up with the extra or missing hour. We have Franklin to thank for this phenomenon.

The problem is that he wasn’t really being serious.

Franklin suggested a new management of time as a letter to the editor in The Journal of Paris in 1784: “An Economical Project for Diminishing the Cost of Light.”

Franklin calculated the total savings for about half a pound of candles per family per night. Based on 183 nights, he summed up savings for the city to be 96,075,000 livres tournois — about $200 million in today’s dollars. According to Franklin, “an immense sum that the city of Paris might save every year, by the economy of using sunshine instead of candles.”

Such observations from such a learned man seemed to bear serious consideration. A second look at Franklin’s rationale, however, shows that he was only kidding.

Franklin claimed his shutters were accidentally left open one night when he went to bed, and when he woke up, he saw the darkness of his room pouring out onto the street.

He claimed credit for discovering that it was the sun that lit up the sky, and wryly suggests that the people of Paris may not have caught on to this fact, either, since the sun is already up when they wake up at noon each day.

To remedy this problem Franklin suggested the following:

Every morning, as soon as the sun rises, let all the bells in every church be set ringing; and if that is not sufficient? Let cannon be fired in every street, to wake the sluggards effectually, and make them open their eyes to see their true interest.

Despite his humorous intent, the idea took hold.  Daylight Saving Time was formally adopted in 1916, first in Germany, then in Great Britain. The United States came along a couple years later and started Daylight Savings Time in 1918.  It was so unpopular that Congress repealed it the very next year, overriding a veto by President Woodrow Wilson.

During WWII, President Franklin Roosevelt brought it back, calling it what he called “War Time.” After the war’s end  in 1945, individual states decided how they wanted to handle the matter.