The Greatest Things Since Sliced Bread 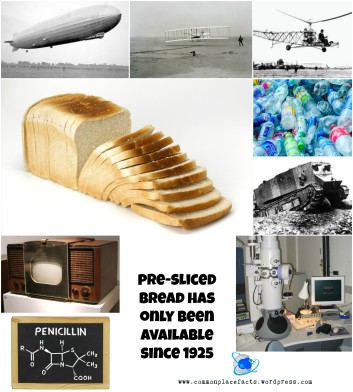 The next time you use the phrase “the best thing since sliced bread,” you might want to consider how recent of an invention that is.

The first commercially-available device that made it possible to sell pre-sliced loaves in mass quantities was developed by Otto Frederick Rohwedder. His prototype was built in 1912, but it wasn’t until 1925 that it became ready for commercial use.

The first pre-sliced loaf using the Rohwedder method was produced in Chillicothe, Missouri on July 7, 1928 by the Chillicothe Baking Company. Sales of bread throughout the United States are expected to total $23.6 billion in 2016, with packaged bread totaling about $15 billion of those sales.

Consider some of the more significant technological and scientific advancements of that era. Since television was invented in 1926, it might be a pretty incredible invention, but it is not, technically, the best thing since sliced bread.

1915 — Invention of the military tank

1926 — Invention of the television