Today’s Forecast: Cloudy With a Chance of Amphibians 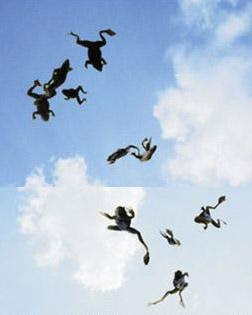 Parents routinely tell their children to dress appropriately for the weather. How should a child dress to be properly prepared for an onslaught of amphibians?

On July 12, 1873 residents of Kansas City, Missouri were astonished to find frogs falling from the sky. Scientific American reported the event, noting that the “shower of frogs darkened the air and covered the ground for a long distance.”

Not to be outdone, Missouri’s neighbor to the north also reported amphibian precipitation — this time in the form of frozen frogs. On June 16, 1882 The city of Dubuque, Iowa witnessed a hailstorm of frogs that battered its unsuspecting inhabitants.

Meteorologists speculate that the Kansas City phenomenon was caused by a small tornado that happened to pick up a population of unfortunate frogs and carry them in what must have been the biggest frog leap in history. The Dubuque incident was likely the result of a tornado or very powerful updraft lifting the frogs high into the atmosphere, where they were flash frozen before beginning their return to earth many miles distant.