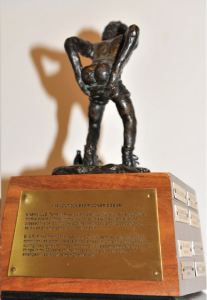 In a world that cherishes personal achievement, there are some awards you probably don’t want to have associated with your name. Here are just a few:

The Diagram Prize is awarded each year to for the book with the most unusual title. Recent winners include:

The Bulwer-Lytton Fiction Contest (not to be confused with the Lyttle Lytton Contest mentioned in this post) is awarded for deliberately writing the worst opening sentence to a novel. Here are some recent recipients:

The Razzie Award is given for the worst work in motion pictures. In 2013 The Twilight Saga: Breaking Dawn, Part II won the Razzie for Worst Picture, Worst Director, Worst Actress, Worst Supporting Actress, Worst Screen Ensemble, Worst Remake, Rip-Off or Sequel, and Worst Screen Couple. One good thing that came out of this movie’s near-sweep of all of the Razzie awards that year is that it conclusively proved for all time that vampires really do suck.

To see additional awards in these categories, read part 2 of this article.