Just When You Think It Couldn’t Get Worse…. 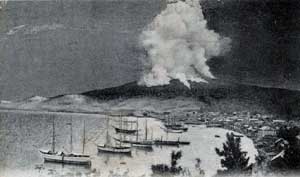 The eruption of Mont Pelée

One would think that living in the Caribbean paradise of St. Pierre, Martinique would be idyllic. Even the occasional volcanic activity of Mont Pelée seemed insufficient to ruin this tropical paradise.

That’s why no one paid much attention to the rumbles and steaming vent holes that opened along the mountain’s sides in April 1902. How could they have known that these were just the first signs of what would become an almost-biblical level of plagues?

By early May the volcanic activity had produced a continuous rain of ash upon St. Pierre. On top of that, the nauseating stench of sulfur filled the air, offering no escape. Life was also unpleasant for more than 100 fer-de-lance snakes, whose homes on the mountainside became uninhabitable. Fleeing their natural homes, the 6-foot-long venomous snakes slithered down to St. Pierre and killed 50 people and innumerable animals before they were finally destroyed by the town’s giant street cats.

And it got worse…

On May 5 a landslide of boiling mud spilled into the sea, followed by a tsunami that killed hundreds. Just three days later, May 8, Mont Pelée exploded, sending a terrifying avalanche of white-hot lava upon the town. St. Pierre was annihilated in just two minutes. Of the original population of 30,000 inhabitants, only three were documented to have survived.