Reducing the Werewolf Population One Adoption at a Time 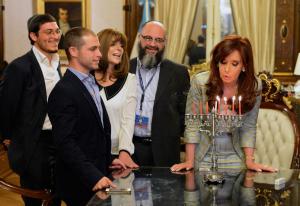 Going the extra mile to keep the werewolf population down, Argentina’s presidents have made it a custom since 1907 to “adopt” the seventh son born in a family.

The practice comes from a Russian legend that a family’s seventh consecutive son was cursed to become a werewolf. Immigrants brought the legend to Argentina, where werewolves are known by the name lobizón.

According to the legend, the only way to prevent the cursed individual from transforming every full moon into a lupine form beginning on his thirteenth birthday is for the affected person to be adopted by another family.

Argentina’s presidents have stepped up to the plate by adopting the cursed seventh sons since 1907. In the 1970’s, the practice was formalized into law, giving the adopted boys presidential protection, a gold medal, and a scholarship for all studies until the age of 21. For years only boys of Roman Catholic families qualified for this presidential perk. In 2009 the law was amended, removing the Catholic-only qualification.

In 2014 the first Jewish beneficiary of the amended law was adopted as a “godson” of President Cristina Fernández de Kirchner. Yair Tawil’s parents formally requested adoption when Yair was born in 1993 and were denied because they were not Roman Catholic. Yair personally wrote to the president in 2014, citing the change in the law and requesting reconsideration.

While research on the subject is scarce, it does appear that the custom works. To the best of anyone’s knowledge, no seventh son who has been adopted by the president of Argentina has become a lobizón.