One Little Letter Makes All the Difference 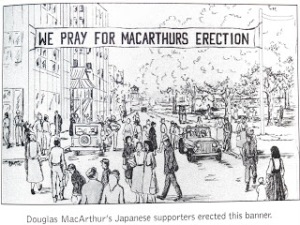 Japanese speakers frequently have difficulty differentiating between the English letters “L” and “R”. This was particularly evident in 1950 when supporters of General Douglas MacArthur (then serving as military governor of Japan during the post-war occupation) tried to encourage him to run in the next US Presidential election.

The banner, stretched across a busy Tokyo street, proclaimed, “We pray for MacArthur’s Erection.”